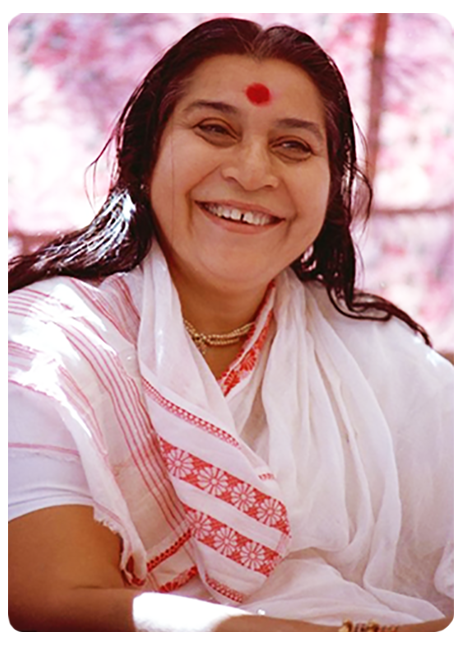 All the people of the world will be happy to know that Shri Nirmala Devi (Mataji) is the incarnation of this era.

This is also mentioned in the Holy Quran that a beloved worshipper / devout of God is born.

In order to establish Dharma, a great soul (Avatar or Alia) takes birth on the earth in the form of body. This is because the Avataar wants to show to the world that it is possible that negativity can reside in the man who seems a sage to all and a soul of a sage can reside in an inhuman individual who seems of a demonic nature to all. So the sage should be saved and inhuman people should be eliminated by Brahma Shakti (Kundalini, Rooh, Shruti). In order to establish Dharma, I (Shri Krishna ji) have to take birth again and again. And thus this era can be replaced by the power of self-realization.

This time Shri Nirmala Devi Maha Avatar has arrived on Earth as an incarnation to put an end to the Kali Yuga and establish Satyuga. Earlier she took birth on earth as Goddess Parvati, Goddess Fatima, Goddess Gurunanki and Goddess Mother Mary to reform the earth and bring the change in the era of that time. This time she has arrived with full powers in the form of Shri Nirmala Matajii. Shri Mataji was born in a Christian family in Chhindwara village, Madhya Pradesh, on March 21, 1923, in a middle class family. This village lies in the middle of India, from where imaginary central line can be drawn on the map going from the centre of India, showing 2 equal parts of India. Shri Mataji wants the humans to achieve balance from their soul and remain balanced from within. She says this state of balance can be achieved by the humans only by means of self-realization.

That is why Shri Mataji has given this power of self-realization to humans by way of feeling the presence of cool air on the palms (Brahmashakti, Roohu). Shri Mataji has explained the balance is achieved by human, such that Sushmna nadi starts in the body of human and the kundalini sitting in the human body in the dormant state gets active. Any problem can be solved by the means of this Brahmashakti. By achieving this power of Brahmashakti even a common man can become a doctor, Guru, Jyotish, Alia, Sadguru. 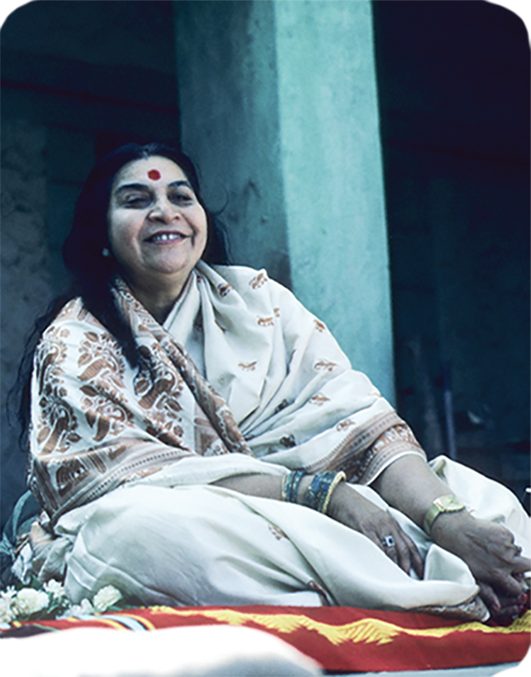 Shri Nirmala Devi started teaching about this power of Brahmashakti since 5th May 1970, which was free of cost. She continued this teaching throughout her life and merged her body into the 5 elements (passed away) on 23rd February 2011, in the town of Kabelagaon in Italy (Europe). She gave self-realization to her disciples and made them Guru, Alia such that her disciples spread this knowledge and power of self-realization to the world free of cost.

Shri Mataji eliminated the caste system by establishing “Vishwa Nirmal Dharma”. This Dharma established by Shri Mataji includes Hindu, Muslim, Christian and Sikh. Poorest person to richest person in the society can gain knowledge about the method of practicing Sahajyoga in Shri Mataji’s Ashram, free of cost. No fees is demanded by the Ashram for this. Any poor person who is not capable to pay for his stay, food can stay free of cost in the Ashram for gaining the knowledge of Sahajyog. And the person who is capable can contribute his share to the Ashram for his stay, food , etc as per his own wish if he chooses to contribute. There is no compulsion or any mandate on anybody to pay any kind of fees in the Ashram.

The practice of performing Sahajyog is successful all over the world in 200 countries, free of cost. One such Satyug Mandir (Ashram) is established in the Sallarpur Village (close to Dankaur kasba), near Buddha circuit, Greater Noida, Uttar Pradesh, India by Shri Mataji’s disciples. Any person (Sahajyogi) from any part of the world can stay in this Ashram for gaining the knowledge of practicing Sahajyoga, free of cost. He can then become a Guru, Alia by attaining self-realization. This Ashram of Sallarpur is a part of Spiritual Foundation Trust which is formed by Shri Mataji’s disciples. It is only the team of Spiritual Foundation who declare at forefront, in media, and in public, worldwide that Shri Mataji is “Mahaavtar”.

Since ancient times many saints, Avatars (Shri William Black, Rabindranath Tagore, Paigambar Saahab, Shankaracharya and Guru Nanak Devji) have mentioned about Shri Mataji in their books. Today Shri Mataji’s self -realized disciples talk about every Holy book (Shrimad Bhagavad-Gita, Quran Sharif, Guru Granth, Bible) and can prove which Temple, Mosque, Gurudwara, Church is filled with positivity and which of them are negative in nature. The disciples can even prove that visiting which of these holy organizations (Temple, Mosque, Gurudwara, Church) can be actually fruitful and which will be of no use. The disciples can give the proof that displaying a particular photo of Shri Mataji can stop calamities like Earthquake, Tsunami, other natural disasters to take place in that particular part of land. These calamities (negativity) change their path and get converted to positivity. Many uncommon non curable diseases can be cured by means of Sahajyog, irrespective of the strain of virus attacking the human. A war cannot happen in the area when there is a presence of a real Sahajyogi on that land. When there is a Sahajyogi in your house, the question of disagreements, disrespect, ill-treatment, misbehavior, arguments does not arise. There will be only love and respect in the house among the family members. Even the addiction to alcohol and drugs is eliminated from the body of an addicted individual, once he starts practicing Sahajyog. By the means of Sahajyog all the 5 elements become positive and hence all the problems can be solved. When astrology, medical science, money all fail to give good results, then only the power of self-realized individuals can bring the real difference, with positive results.

Home
About Us
Event
Contact Us
Gallery
Shree Mataji
Chakras